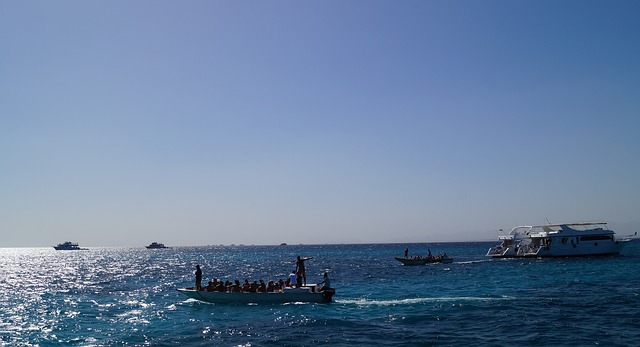 Red Sea, also known as the Erythraean Sea, is an extension of the Indian Ocean located between Asia and Africa. From south, you can enter the sea through Gulf of Aden and in the north from Gulf of Aqaba. It was created by the movement of plates in the Earth millions of years ago. The sea is 190 miles in width, 1,200 miles in length and an average depth of 8,200 feet.

It gets its name from the seasonal color changes Trichodesmium Erythraeum shows which is present near the water’s surface. Some say that Red is for South just like Black (Black sea) may refer to the North. Ancient geographers sometimes call it The Arabian Gulf.

The Red Sea’s water is exchanged by Indian Ocean and the Arabian Sea. It is one of the saltiest bodies of water and the salinity ranges from 36% to 41%. Rainfall over the sea is extremely low, with thunderstorms and dust storms. Generally, tides range from 0.6m in north to 0.9m in the south whereas the central is tide less. In the north part of the Sea the winds are north-west whereas the rest of parts have reversible winds. There are some historical and religious beliefs related to it telling us about the parting of the red sea by Moses.

What can you see?

Red Sea is rich in minerals and there are over 1200 species of fish that can be found. Minerals like magnetite, gypsum, anhydrite and polyhalite are evaporating minerals. Central of the sea has known to have volcanic eruptions leading to formation of volcanogenic minerals. This comprises of tuffites, cristobalite and zeolites. Authigenic minerals are sulfide, aragonite, protodolomite and how can we possibly forget Quartz! Nanofossils, pteropods and pyrite are also found.

The Sea is a rich ecosystem partly because of the Coral Reef which extends along the coastline. The reefs are 5,000-7,000 years old which along the coast form the platforms and lagoons. Reefs are visited by various species of shark.

Ras Mohammed National Park was set up by the Egyptian government for the protection of marine life. Red Sea has many desalination plants along its coast which discharge chemicals and brine. Due to this corals are killed and diseases to the fishes are caused. It is predicted that with the increase in intensity of the desalination the fishing industry could be profoundly affected. Sea’s water could be used in cement industries and oil refineries.

With Saudi Arabia and Yemen on the eastern shore and Egypt and Sudan on the Western shore, Red Sea can be used for tourism. The sea started to get attention after few expeditions and now they have facilitated many recreational activities and made hotels and restaurants.

The sea is put in good use since after the development. Popular spots in the north are Dahab, Hurghada and Sharm El sheikh.

Dahab is one of the most appealing Red Sea destinations. There are beaches for relaxing and many stores for shopping. This specific place could be visited any time of the year as it is pleasant throughout. Scuba diving and snorkeling are very popular in this area.

Egyptian coast of the sea is best for diving and fishing. Enjoy your time at any of the luxurious hotels in this area. South of the sea is good for quieter diving spots. MY hurricane and Blue Seas are live boards with toilets, tables and proper diving platforms. Feasts and barbecues are enjoyed there with an air conditioned dining area.

Hamata and Eilat are two locations which have good diving reviews. Generally, autumn and spring are the best times to visit the sea because in summers the weather is unbearably hot. Nights are usually cool and pleasant and sometimes you may need warm clothes. Winters are also not a very good time to visit the sea.

With all the fun and water activities some accidents have been reported so better be careful and follow the instructions before you dive in! Bombings and terrorist activities have also taken place in the last few years.

You can access the sea from any of the above mentioned boundary countries but Egypt may be the best choice. Book your visit now and get closer to the beauty of nature.

6 thoughts on “Experience the Red Sea”

This website uses cookies to improve your experience while you navigate through the website. Out of these, the cookies that are categorized as necessary are stored on your browser as they are essential for the working of basic functionalities of the website. We also use third-party cookies that help us analyze and understand how you use this website. These cookies will be stored in your browser only with your consent. You also have the option to opt-out of these cookies. But opting out of some of these cookies may affect your browsing experience.
Necessary Always Enabled
Necessary cookies are absolutely essential for the website to function properly. This category only includes cookies that ensures basic functionalities and security features of the website. These cookies do not store any personal information.
Non-necessary
Any cookies that may not be particularly necessary for the website to function and is used specifically to collect user personal data via analytics, ads, other embedded contents are termed as non-necessary cookies. It is mandatory to procure user consent prior to running these cookies on your website.
SAVE & ACCEPT